The great Ludwig van Beethoven is an inspirational testament to what is possible in the face of seemingly insurmountable obstacles. 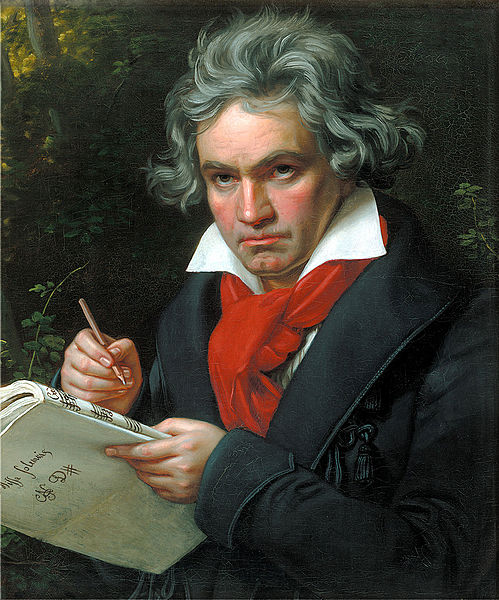 Born in Bonn, Germany, on the 16th of December 1770, he was the second child of Johann and Maria Magdalena van Beethoven.

Beethoven’s father was a violent drunk who planned to turn his son into an investment and subjected him to ruthless discipline and severe physical abuse. Many times his father would come home late at night from his drinking bouts, rouse the sleeping child, and forced him to practice his exercises on the clavier. As a matter of fact, many experts believe that Beethoven’s deafness later in his life is related to and caused by the many blows to the head by his very violent father.

Beethoven’s childhood was darkened by poverty and his intemperate father, but his mother’s tenderness and affection brought some warmth into his life.

When he was only 17 years old, he was granted a trip to Vienna to meet the famous Wolfgang Amadeus Mozart. Mozart was so impressed with Beethoven’s improvisations and said:”This young man will leave his mark on the world.” And So He Did!!!

Across these years of immense creativity there passed also the shadow of tragedy. Early in 1801, Beethoven had begun to detect that his hearing was failing him. As this infirmity developed, he became increasingly sensitive and tried to keep his deafness from even his close friends. He refused to appear in public, and thus his career as a pianist had been destroyed, and he now dedicated himself completely to composition.

Beethoven made his last public appearance on the 7th of May 1824, attending the premier of his Ninth Symphony. This symphony was written when Beethoven was completely deaf. It is the greatest composition in musical history. Beethoven used a chorus of singers with this work. No one before him had ever dared to break the rules of composition by adding singers to a symphony. At the end of the symphony, Beethoven, long stone deaf, continued to beat time to himself though the Symphony had concluded. Gently, one of the soloists turned him to face the audience to accept its ovation.

In 1826 Beethoven became very ill. On his last day at around 4 or 5 in the afternoon, it was storming and there was heavy thunder, Beethoven opened his eyes wide, he raised his right arm, his fist clenched, and stared for a few seconds with a proud and menacing gaze into the emptiness before him. On that day, 26th of March 1827, Ludwig van Beethoven died, leaving his mark of genius for all time.

Beethoven belonged to the generation that received the full impact of the French Revolution. He was nourished by the vision of the freedom and dignity of the individual. He created music of a heroic age and never to be forgotten. His music proclaimed its faith in the power of man to shape his destiny. He revolutionized the way composers wrote their music He paved the way to new forms and expressions with dynamic contrasts, explosive accents, and opposition of low and high register, syncopation, and powerful crescendos. He simply dared to be different and didn’t care what anyone thought or said about him.

Beethoven forever changed the course of music history with his inspirational compositions. He wasn’t afraid to break the rules of composition and introduce something new and exciting.

Beethoven is the most famous and greatest classical composer who ever lived. He is remembered for his powerful genius and for composing the most intense and exciting music in history, while completely deaf. Even while his deafness worsened, Beethoven’s music became even more powerful. The best example of this is the Famous Symphony No. 5 with the Most Famous 4 Notes in Musical History.

His death marks the loss of one of the greatest composers and masters in all history. But his music was never forgotten and lives on forever for all of us to enjoy and cherish. He truly left us with unspeakable treasures, and he made his mark in the world. He was right: there are many kings, but there is only one Beethoven!!!

Beethoven’s life and music remind me so much of my own life as a mother of a special needs child: at times I feel angry, I feel sad; I feel tenderness, I rejoice in little victories. Sometimes I want to punch a hole in the wall, and sometimes I want to just enjoy nature and go on long walks.

Many times my life feels crazy and desperate. I feel inflicted, I feel that my child is inflicted, and I want to give up. Just like Beethoven wanted to give up and kill himself when he noticed that he was becoming deaf. Can you imagine? Music and Life without Beethoven? The treasures we would have missed! Praise God, he didn’t give up. Somehow and somewhere he found the strength to go on, and he turned his anger and sadness over his infliction into something so great, that it marked and changed history, he left us with unspeakable treasures.

Beethoven fought for the freedom and dignity of the individual, because in those days the people were ruled and oppressed by the king of the land. But isn’t that just like our special kids today? They are oppressed by lack of integration and lack of respect and understanding.

Beethoven represents an example and testament of what we as parents, as teachers, as care-givers of special children are called to do: We Are Called To Greatness!!! You Are Called To Greatness!!! We are called to stand up for those being crushed and be their voice, and not worry about what others say or think. We need to break the rules and get others to follow suit. Beethoven broke all the rules of composition and paved the way to the new. We need to stand up and get the public and the government to change their rules and judgments concerning “defective” babies. We as a society need to stop segregating special needs people. Life is of inestimable worth from conception to the grave, and abortion is never right, and treating people with special needs badly is never o.k. We need to pave the way to the new believe system, that all children are God’s creation and worthy of dignity, love and protection.

Be encouraged by Beethoven’s example. He is a great testament of what is possible despite unbelievable obstacles. If he can compose the greatest music in all history while completely deaf and while carrying the baggage of an extremely violent childhood, then you can find the strength and pursue your calling and live life on purpose.

Get access to our free lessons plus receive our newsletter full of resources on how to successfully teach piano to the child with special needs.

You have Successfully Subscribed!